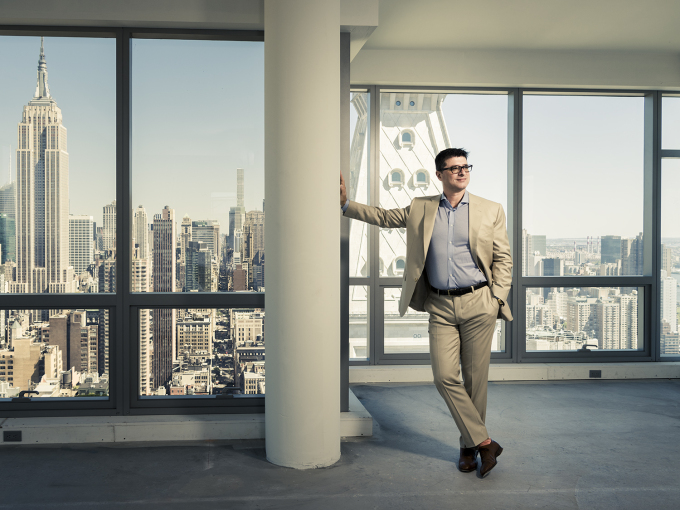 Check out this interview with Edward conducted by The Commercial Observer. See article below:

The firm’s development in this area, and the carving of their unique business niche, stems from the colorful background of its Ukrainian co-founding partner Edward Mermelstein, whose peripatetic childhood provided him with a far-reaching worldview that came in handy when settling on a career. Commercial Observer spoke with Mermelstein about how his place in real estate came to pass.

Commercial Observer: Tell us about your personal background.

Mermelstein: I’m an immigrant, originally from Ukraine. My parents took us out of the Soviet Union in 1974, and we made it to the U.S. in 1976. I went to many different schools. I went to first grade three times in three different countries—Israel, Germany and the U.S. I grew up for about 10 years in Queens, went to the Bronx High School of Science, then [New York University] for undergrad and Western Michigan University for law school.

How did being uprooted so often and having such an itinerant childhood affect you in the long run?

It teaches you to adjust very quickly, because [you have to] when you don’t speak the language of the country you live in, which happened [to me] three times in a two-and-a-half-year period. From 6 to 8 years old, starting with Russian as my first language, then moving to Israel, where Hebrew was my second language. German was my third, and within a short period of time, we moved to the U.S. So English was the fourth language I had to learn in a three-year period. Looking back, it was a good experience.

Did you know early on that you wanted to be in real estate?

I always wanted to work in real estate. While my initial law practice was more focused on litigation, the idea was always to go back into the real estate practice. As our practice started to grow and we started working with foreign investors coming into the U.S.—this was in the mid-1990s—we realized that the main interests of most foreigners coming into the U.S. in terms of placing money into investments typically revolved around the real estate world. That was probably the impetus that drew me further back into real estate as we went forward.

Where are your clients from?

About 60 percent are from the former Soviet Union, and about 30 percent are Asian. The balance is spread between Western Europe and South America.

How did you develop your client base?

Back in the mid- to late- 90s, the former Soviet Union started exporting high-net worth individuals. That started expanding substantially after 2000 and grew rapidly. Our practice started seeing more and more foreign investors coming in, not just from the former Soviet Union but from Asia and, more recently, South America and Western Europe as well. The practice became quite diverse and, for the most part, focused on working with foreigners coming into the U.S. with an interest in real estate.

Was this by design, or was the evolution organic?

When I started the practice, I thought the fact that I spoke Russian and Hebrew and understood German lent itself well to working with foreigners coming into the U.S. Plus, the fact that I didn’t graduate from the top of a class at Harvard Law School limited my practice to what we were able to grow, and that was representing foreigners coming into the U.S. We helped many of our immediate family members that came into the U.S. As time went on, I became involved, through different philanthropies, in helping other families come here. From the nonprofit side, it was very rewarding, but the for-profit side enabled much of what we did in the nonprofit world to work quite well, expanding my business from the law end into other practice areas that support foreigners entering our country. It became a business model that was very hard for someone else to compete with, simply because we, at this point, have been doing it for a long time.

High-net worth individuals from developing countries typically don’t have any professional contacts in the U.S. So when they’re first entering the U.S., the relationships are mostly either family relationships or close friends that are recommending you. This is as opposed to having someone worth several hundred million dollars entering the U.S. Typically they’ll have a contact, whether in one of the largest law firms or consulting firms, and their first stop is not going to be a boutique law firm geared toward working with foreigners entering the U.S. for the first time. They’ll typically go to either a White & Case, a McKinsey & Company or a consulting firm of a certain size simply because when you’re dealing at that level, you’re directed by other high-net worth individuals to the most prominent businesses covering that sector. We were lucky enough to have the ability to leverage our immediate relationships where someone coming into the U.S. wouldn’t know to look for the top law firm, or if they did know, they were more comfortable dealing with someone who understands their culture and language.

How often do you travel?

Less so these days. I used to travel once a month, eight or nine years ago. At this point, most of our clients know where to find us and prefer to deal with us in the U.S., as opposed to in their own countries. Much of that has to do with economic and political instability of many of these countries.

Tell me about some of the deals you’ve done.

Going back to where we initially started, in the mid-1990s, we brought a developer from Russia to the U.S., and that developer was looking for investors to do business in Russia. So we provided a bridge between two developers where both invested in the others’ properties. One was located in the center of Moscow, in one of the most prestigious areas, and the other development was in mid-Manhattan, in the 50s, off Third Avenue. That was the first major transaction for us. The investment was equal on both ends. Both parties had skin in the game, and ultimately, both projects did quite well.

Who were the parties?

One was a fairly prominent developer in New York. I’d prefer not to mention his name. The other was a developer from Russia, no one anyone would recognize today in the U.S. [They invested around] $20 million on each side.

Do you have a few transactions you can talk about in more specific detail?

The names are going to be close to impossible to bring up. Something that is easy to disclose, because it’s public information, is that we’ve done a large volume of transactions at 15 Central Park West. The building opened in 2007 for sale, and we were extremely active in that building. That has continued over the years. Our relationship with [the project’s developer] Zeckendorf Organization has blossomed quite well as a result of the transactions we started back then. Now, working with [William] Zeckendorf and his brother [Arthur] and their investors on their current projects is quite unusual for a boutique organization such as ours.

Why is there so much secrecy about your clientele?

We represent high-net worth individuals from developing countries that, for most, have a political shelf life of three, four, five years maximum. So anyone coming from these countries with a substantial amount of money is typically not looking to publicize the transaction. The media in their own countries is not going to treat them well.

What kinds of deals are your clients most interested in?

Most of our clients are more comfortable in wealth preservation than income-producing properties, so they are interested in very stable investments. They are comfortable in either buying new condominiums and renting those out, going in as limited partners in major developments, or, in certain cases, buying land in high-profile locations.

Where are the surprising markets your clients are investing in?

We’re still seeing an attraction for the safest and highest profile locations, so Manhattan is still the safest and most attractive for anyone who understands real estate. My clients typically will not go outside of Manhattan, and most will not go above 96th Street. They’re not going to be in Long Island City or in Brooklyn. That’s fairly consistent.

Are the majority of your clients based here, or are they overseas?

Many of them began moving to the U.S. a few years ago, when the economies and political situations started to get shaky. More and more we’re seeing that these individuals that have made their money and are comfortable in just preserving their lifestyle and their investments are now moving their entire family to the U.S.